Sarasota, FL, December 11, 2014 — This Saturday, ABC 7 airs ART {R}evolution, a documentary exploring how art has evolved in Sarasota and how it drives innovation in other fields such as technology and design. Yet, while it explores the legacy of the Ringling Family and the vibrant creativity driving both art and innovation in Sarasota, {R}evolution isn’t just any program; it’s the result of a groundbreaking project by students of the Ringling School of Art and Design’s ART Network course.

All Ringling Television Network, or ART Network is Ringling’s student-centric television station and online channel. A few years ago, Lisa Moody, who heads this 21st century answer to the A/V club, was asked to turn the Network into a course to teach general production skills. Response to the ART Network elective was so strong that Lisa decided to focus the course on producing a documentary. As she explains, Actually, the idea came from ABC 7. Director, Steve Sabato said, “You know we’d really like more work from your students. We would like to work with your students.”

From that moment, four students began a unique “real-world” education that started with pitching their project to ABC 7 executives. ABC not only greenlit the project, but also stipulated that if the final product was good enough, they would broadcast it. Getting the project approved was just the beginning of an amazing, rewarding and challenging experience that would not only show them what it takes to produce a documentary, but also that they had what it took.

“…the story we wanted to tell was about the history and transformation of the arts in Sarasota.” - Andres Paz; Junior, Motion Design

Just conceiving and completing the documentary in 15 weeks with a slim, four-person crew would be daunting even for professionals, but the students set the bar even higher by choosing a sound bite format for their story.

Where conventional documentaries begin with a script, sound bite documentaries start with research, interviews, and footage. The narrative develops afterwards, during the editing process. This required a great deal of trust and collaboration from the students to come up with a cohesive vision.

“One of my favorite responses from people who have seen the film is how well it flows together. The storyline makes sense and there aren’t big variations in our editing style.” - Derrek Gunnells; Junior, Advertising Design

While being fellow students helped, another factor was that students had a chance to take on every role of the production. Each had an opportunity to be producer, researcher, writer, interviewer, and editor. They shot the footage, they created the title sequences, they chose the music.

Each team member brought different skills and experience to the project, yet they all possessed enthusiasm and a willingness to teach as well as learn.

“Along the way we really fed off of each other and one person would learn something and spread it around to the rest of us and so on. Lisa (Moody) was very encouraging with learning new things and not letting us dangle.” - Kristin Sjoquist; Junior, Motion Design

Among the things they learned was how to take a creative idea and develop it within practical constraints (such as timing their story to commercial breaks). “As creatives, we tend to focus more on the artistic aspect of what we do,” Lisa explains. “So even though this was really creative…it was also very formulaic.”

“Guidelines and deadlines are helpful. They keep you from going on so long that you bore someone. They also give you the time to reflect on what’s really good, we have all this information for you we’ve picked the best things. Plus, it’s really hard to procrastinate on a deadline.” - Derrek

“One of the phrases that kind of went around with all of us was, ‘kill the puppy, have the baby.’ You sit down and you have 15 minutes and a commercial break, then another 15 minutes and that’s what we have got to do. Eventually, you put too much into the 15 minutes, then you have to find the puppy (that one piece that you have to take out). Or, you don’t have enough and you’ve just got to make it happen to meet the deadline. So, I feel like the deadline was not only a good creative stimulant, I feel like it was also a good determination factor as well…to make sure you actually had the standard that was expected of you. I feel like it set us to a higher standard of professionalism and expectation than we could have met on our own.” - Kristin

“When you get enough freedom you sometimes abuse it. I think that is just human nature, but if you have checkpoints in which you need to have certain things done, I think that is better than having a lot of time to do it. The way I see it, you take little steps because if your team just goes step by step you can make it easier, but if you’re thinking I need to make this leap in this much time, you are going to think it is going to be too hard. I mean, think about it, look at our documentary, four people in 15 weeks!” - Andres

Yet, despite the difficult task of producing a documentary worthy of broadcast in a semester with just four people, Andres, Kristin, Karim, and Derrek came together as more than a team, but as Andres describes, “a family.”

“As time went by we kind of had a bond as we spent more and more time together. It was a lot of fun to see what each person brings and every person had his strength…we could rely on each other.” - Karim Maksoud; Senior, Motion Design

“It wasn’t just one person having to meet a goal. It was the four of us having working together and supporting each other through the whole thing to meet that goal, which I feel really influenced us in the way we treated the work and we treated each other.” - Kristin

Pulling this project off was less about personality and more about process. Early on, everyone was still figuring out each other’s work styles. Interviews on the first day took a couple of hours, but as communication skills improved and their collaborative process took shape, interview time, including set up and breakdown, was slashed to just ten minutes. At the end of the project, they had not only produced an hour-long program, they had a deeper understanding of their own potential and how to make the most of it for their career in the “real world.”

“I have always been the guy behind the camera...it was fun…trying different roles, figuring out what I’m most comfortable with and what is most difficult. I got to spend time interviewing so that was a booster for myself to have that confidence to talk to people and meet them and they know me now. So it’s been fun.” - Karim

“I have learned a lot from my experiences, especially this documentary. We are able to take what we have learned in the field and out of the classroom, bring it back into our computers and accentuate and excel our pieces.” - Kristin

“My favorite part was pulling everyone together because it took a lot of networking to get everything done. It took some convincing and a lot of permission granting, so learning that aspect of it and pitching it as well, was really helpful for me and what I want to do.” - Derrek

“I love storytelling no matter the medium, so that is one of the things that I learned in this process was that the documentary is about the message. That is one of the things I have been able to translate back to motion design. I think growing as a creative person you need to be involved with different things, you need to step out of your comfort zone and try different things. Sometimes you need that first step to just venture to unknown lands and that is what I did. I just trusted my crew mates…I am glad I did.” - Andres

Watch Art {R}evolution Saturday at (7 pm) on ABC 7. It can also be seen on the Ringling website. 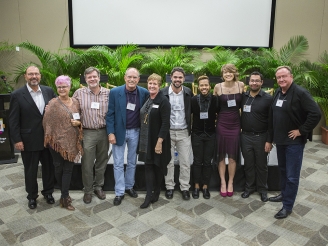 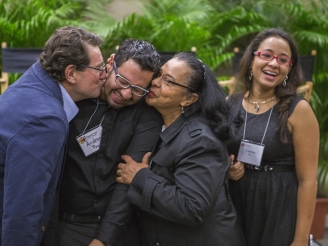 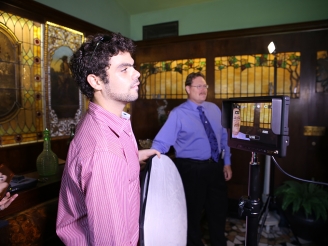 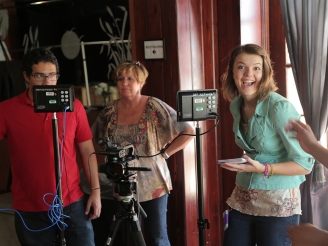